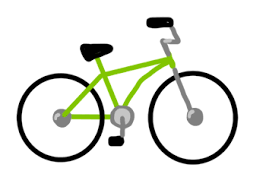 I recently found an article that reminded me of the health benefits of cycling and cycling trips.

It also reminded me of the cycling trip I went on many years ago.

Keep reading for the whole story!

In another lifetime, many years ago, when I was sort-of-fit, I went on a cycling trip. I think I was 22 years old.

It must have been about 1989? So, before the internet. Before cell phones. Before GPS.

My boyfriend/fiancé came home one day and told me that some friends of his from London, Ontario had an itinerary for a fantastic 3 day cycling trip. They, apparently, had all the plans laid out. All we had to do was book the time off work, pack up our bikes and drive to London and the adventure would begin.

Before I go any further, I would like to mention that the people we went on the trip with told me that one day I would laugh about all of this. Turns out they were right. I hope you laugh too, because someone should!

I was a trusting sort, so I booked my vacation time from work and did a bit of training here and there to get myself into shape for a cycling trip. I had a decent mountain bike, and a good-sized backpack. My boyfriend had a larger backpack and some pannier bags for his bike. He was in better shape than I was and he assured me he could manage any extra weight we needed to carry.

We stocked up on trail mix, bicycle shorts and water bottles.

We were about 3 hours into the first leg of the journey, when I asked our fellow travelers where we would be staying that night. They responded that we would find out when we got there. I was shocked. My 22 year old self had assumed that our leaders had some sort of plan. Reservations at a motel? A bed at a B&B? A campsite? A hostel? My shock must have shown on my face as they tried to reassure me that they were pretty sure we could make it from London to Paris on the first day, and there were bound to be some sort of motels available in Paris, Ontario!

What choice did I have but to keep pedaling and hope for the best?

We made it to Paris. Tired. Hungry and dehydrated. We found a flea-bag motel and a mom and pop style restaurant. The food was good. The motel was dingy and the shower rained cold, lime pebbles on your head along with the water. I have never experienced such a shower. Our friends lied to us and told us that their shower was hot and luxurious. They really meant no harm. They were having a good joke and confessed to their fib later in the evening.

We woke up in the morning. Stretched out along a fence and started again. We had an old-fashioned paper map with a route marked out. We had made good time from London to Paris and were hoping to make it more than another 3rd of the way home on our second day, so that we would have a shorter ride on our last day.

Fate had another plan for us.

We rode against hot, strong, head-winds most of the day.

There was a construction detour and we were chased by dogs.

I don’t remember the name of the town we stopped in, but back then, you could walk into a convenience store with an empty water bottle, and they would let you fill it at their tap or their hose. You didn’t have to buy water in plastic bottles from the fridge. I remember we used a hose and filled our bottles, but we also hosed each-other off to cool down behind the store.

We found some lunch somewhere and set off again.

Then the proverbial shit hit the fan. The strong head-winds turned into gale-force winds. Huge thunder storms were brewing in the distance. They were coming our way. We pedaled our hearts out on a long stretch of highway, hoping to get to a town, or any sort of shelter before the storm hit. We didn’t’ make it. We were pelted with rain and golf ball sized hail for several kilometres. I can still remember the sound and the feel of the hail hitting my body. I was terrified that some transport truck would not be able to see us on our bikes and we would all die.  I could barely keep sight of my companions ahead or behind me. We had somehow ended up on a bare stretch of highway with no shelter in site, other than an abandoned gas station.

It was little more than a shack and some old pumps overgrown with weeds. We headed for the shack and took shelter under the overhang of the roof. The wind had turned cold somewhere along the way and we were shivering uncontrollably. We had battled the elements for so long, we were exhausted and hungry. The only food we had left with us by this point was the trail mix. We tried to eat the trail mix, but our hands were frozen into the shape of the handle grips on our bikes. I remember my friend trying to give me a handful of trail mix, only to see it fall through the cracks of my frozen, claw-like hands. I was close to tears by this point and my team reassured me that the storm would pass and we would make to somewhere warm and cozy soon. I tried to take heart in their confidence.

The storm did eventually pass. We got back on our bikes and kept going. The alternatives were few.

We made it to the next town. Victory was ours!!! Surely, we would soon be warm and safe in a cheap motel. Except…. There was a softball tournament in town. There was not a room to be had anywhere. I remember the four of us, crammed into a phone booth, shivering, looking through the yellow pages of the phone book for somewhere to stay. That is what people did before Expedia and Travelocity! We were desperate. Anything would do. My friend even called the police station asking if there was anything they could recommend. We would have slept in a jail cell if there was one available and my friend told the officer so. We were running out of change. Again, back then, if you didn’t have quarters, you couldn’t make another phone call.

There was nowhere to go and we had very few quarters left. Another thing is that back then, almost nobody our age had a credit card. We were also running low on cash. Credit cards were something your dad or your grandpa had. One of our group had a card for “emergency purposes.” We finally decided that since there was nowhere to stay, we would have to try to make it to the next town. We were exhausted. It was dark and about 10pm at night by this point and we knew there was no way we could go any further. We called the local cab company and asked them to send the biggest cab they had.

They sent a large, old, boat of a car. We disassembled our 4 bikes and stuffed as many parts as we could into the trunk. The rest of the parts we carried on our laps in the car. I remember some sharp metal pieces digging into my leg for the entire journey. The guy who had a credit card payed the fare to the next town. I know it was over $50, which was a lot of money back in 1989! When we were all settled into the cab, we realized that we smelled reeeeeaaaly baaaad! We apologized to the driver and tipped him well. I am sure he still has a story to tell about the 4 half-frozen cyclists stranded in his town.

So, now we all owed my friend with the credit card money for the cab ride. We made it to the next motel. I have never been so happy to stay in a dingy motel in my life. All of our clothes were soaked. We cranked the heat and hung our clothes around the rooms as best we could and ordered pizza. Again, our friend with the credit card took care of the bill. We stripped the beds and ate pizza dressed toga-style in the hotel sheets. Best damned pizza I ever had!

The great thing was, that since we had taken a cab ride the night before, we had covered a lot of ground. Our last leg of the journey was significantly shorter than we had planned for. This was a good thing, because our bikes were still in pieces and it took some time for us to figure out whose tires were whose and put all our bikes back together again.

It was a beautiful day and we got off to a good start. Then we were reminded that some rural Ontarians are not the most forward-thinking, tolerant people. Some yahoo in a pickup truck took a good run at us. I was run off the road and had a pretty good wipe out. I remember picking the gravel out of my leg and thinking that if I kept on riding, the bleeding should wash out any remaining dirt. I still have the scars.

Even still, I remember we felt so good, just to not be pelted with hail.

A little further along, we passed a cemetery. A lady was crying over a tipped tombstone. Vandals had tipped several markers during the night. We stopped and tried to help, but as much as we tried, we couldn’t right the stone. The lady was very thankful that we had at least tried to help. I always hoped we made her feel better that someone cared enough to stop and try to help. She was going to have to contact someone with a forklift to fix up her loved-one’s grave.

We finally made it back to our starting point. I remember little except that we ate, we packed up our things and headed home. As much as we had a rough time, I felt very bonded with those friends. We had gone on a journey together. We had conquered many obstacles and we had overcome.

A few days later, I told my family about our trip. My father frowned and asked what town we had been in on the day of the storm. When I told him, he said that he had been in that town that day making a delivery with his trailer! If we had only known that he had been there we could have had a safe ride home with lots of storage for our bikes too! But, that would have taken away from our adventure!

Several years later I remember telling my children about our cycling trip. They asked, “Why didn’t you just use your cell phone and call for help?” It is hard to remember or imagine a time before cell phones existed! My kids certainly cannot remember such a time.

So, as the article states, cycling trips are really great. A cycling trip will definitely change your life, build character and show you much more than you could ever see by travelling in a car. You may not end up being where you expected, but you will never know until you try. A tour guide with an actual plan might be a really good idea and it is a good thing we now have cell phones